Case Study 4, led by the University of Coimbra, takes place in the Lower Mondego Irrigation District (LMID), located in the downstream part of the Mondego river catchment, in the Centre of Portugal. The LMID, which is a state initiative, comprises presently about 13,000 ha of irrigated agricultural land that is served by a full gravity irrigation system, whose secondary and tertiary irrigation network is managed by a local Water Users Association (Associação de Beneficiários da Obra de Fomento Hidroagrícola do Baixo Mondego).

Overall, about 5000 ha are presently dedicated to rice cultivation, which corresponds to roughly 40 % of the irrigated land comprised by the LMID. The widespread rice agronomic practices are the traditional ones used in Portugal: i) after the initial flooding, sowing is made mechanically by centrifugal spread, usually in the end of April/beginning of May; ii) the basins are drained before herbicide or pesticide applications; iii) fields are maintained flooded until the last crop phase, but are kept dry during at least 2‐3 weeks before harvest, usually in the end of September/beginning of October.

It is furthermore common practice the replacement of the ponded water during the rice growing season, which is allowed by the availability of irrigation water of good quality and is driven partly by conditions of low oxygen content and high salinity of the ponded water. Poor land drainage might restrict the application of this practice. The number of alternations and the duration of the wet and dry conditions of the soil surface may vary in accordance to the evaluation conducted by the farmers regarding the quality of the water, development of the crop and environmental conditions; they also decide, on a case‐to‐case basis, about the depth of the ponded water layer.

Better land levelling would improve the uniformity conditions in the fields. It is estimated by the water managers that this management practice requires on average about 16,390 m3/ha/year, at the irrigation district scale; variation between individual holdings is likely justified by the different soil conditions. This water requirement for rice cultivation represents almost 80% of the Mondego basin water abstraction devoted to irrigate the whole Lower Mondego agricultural area. The irrigation water tariff paid by the farmers depends on the area of their irrigated land.

Despite the reasonable availability of water for agriculture in the Lower Mondego area, water management in the Mondego catchment is the object of increasing attention due to conflicts arising from a growing demand by stakeholders other than agriculture, new goals related to water quality and the water scarcity predicted by climate change scenarios and hydrological models. In particular, the main problems faced by rice irrigation in the study area include: i) Limitations in irrigation water availability due to water source scarcity; ii) Constraints of the conveyance hydraulic system; iii) Water management problems at distribution and on-farm levels; iv) Environmental risks related with soil salinization and pollution with nitrates.

Pilot Farm 2 – The Experimental Station of Bico da Barca (Montemor-o-Velho) is run by DRAP CENTRO ‐ Direção Regional de Agricultura e Pescas do Centro (Regional Directorate for Agriculture and Fisheries of the Centre Portugal) and covers an area of about 5.2 ha. In Bico da Barca, the two neighbouring rice pilot plots installed have an area of approximately 525 m2 each. One plot is under traditional flooding irrigation and the other under AWD flooding irrigation.

For this purpose, a monitoring scheme was established and applied to all four experimental field plots that involves the installation of hydraulic structures and water meter for surface discharge measurements, water tubes for surface water measurements, piezometers, water level sensors, data loggers, Class A evaporation pan and automatic weather station. The deployment of the measuring devices and structures are indicated in Figure 2 for the two experimental plots in Pilot Farm 1. Similar setting is adopted in the experimental plots in Pilot Farm 2. 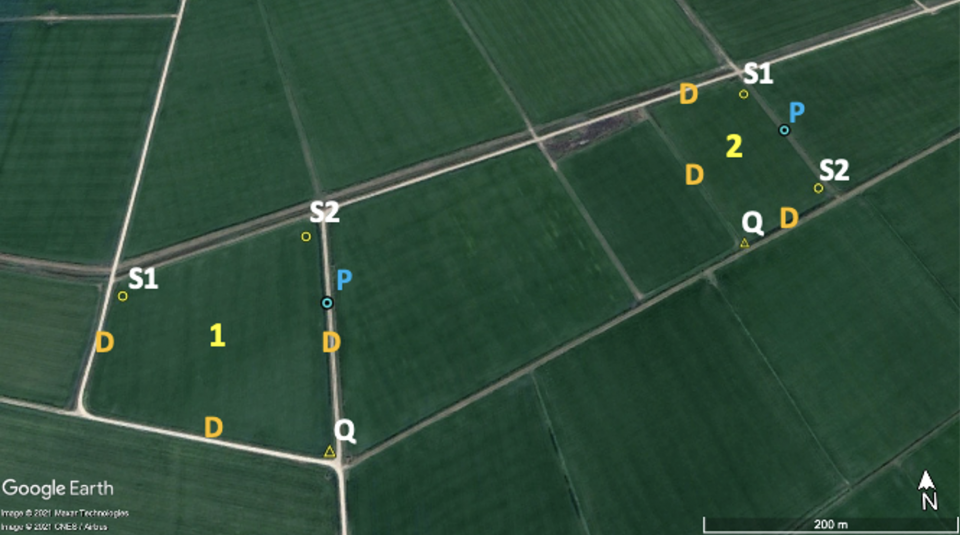