The case study 3 led by TEPRO takes place in the Lower Guadalquivir Valley. The area comprises 200,000 has of marshes located next to the estuary of the Guadalquivir River and between the river and Doñana National Park (UNESCO Biosphere Reserve).

Rice production is traditional in the region with over 36,500 ha dedicated to its production. The traditional irrigation method is flooding, done by a complex system of irrigation and drainage channels that help to recirculate water from different plots and different irrigators communities.

The field experiments of the Case Study are conducted at two commercial farms managed by TEPRO; both located on the right bank of the Guadalquivir River. Farm Desmaisieres, in Isla Mayor, where TEPRO manages around 300 hectares of rice, has been devoted to the Case Study during the rice campaign 2019 undertaking 3 irrigation strategies and 1 control plot. The water for the plots involved is supplied by the Irrigators Community of Mínima. On the other hand, Farm Rubiales, located in La Puebla del Río, hosted a small pilot for rice under drip irrigation, and water is supplied by the Casa Reales River, from the Irrigators Community of Puebla.

TEPRO’s aim with this project is to test different strategies for reducing the amount of water used without harming the high yields obtained with the traditional irrigation method within the Guadalquivir marshes.

Farm 1: Finca Desmaisieres is located in Isla Mayor (Seville) and is a traditional rice cultivated farm within the Guadalquivir marshes, placed at the right side of the Guadalquivir River. This farm has a total area of 23.8 hectares. The farm is divided into 4 plots.  The whole farm has been devoted to the Case Study during the rice campaign 2019 undertaking 3 irrigation strategies and 1 control plot. 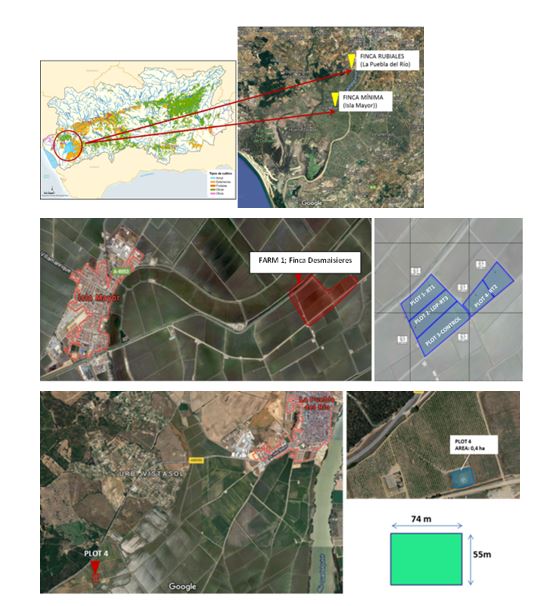 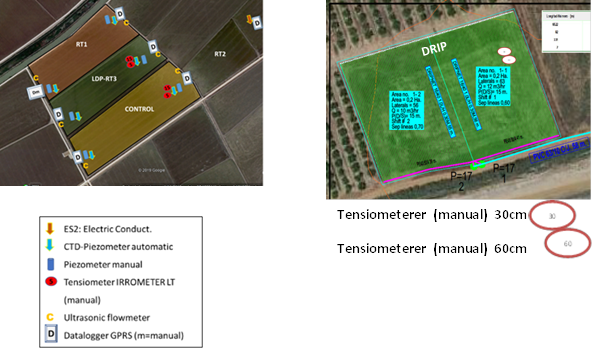 The determining factor in rice production is water. Even though rice production generates significant rural employment and direct and indirect economic activity (rice industry, machinery, agrochemicals, transport), is the aim of critics from different sectors due to the amount of water used. In the area of the Guadalquivir marshes this problem can be separated in two:

In 2019, we were not able to measure but only estimate water use in all plots. In Farm 1 (Desmaisieres) the reason was due to several difficulties to measure water inflow and outflow of the plots with the ultrasonic flowmeters. The difference in water head between the irrigation canal and the field and between the field and the drainage ditch was insufficient to ensure the required flow rate using a pipe with reasonable diameter to install the ultrasonic flowmeter. The proposed modification was to measure flow rate with Cipolleti-type weirs installed in small basins at the entrance and outlet of the plots, measuring the water level of the weirs with pressure transducers and recording the data in dataloggers at short time intervals 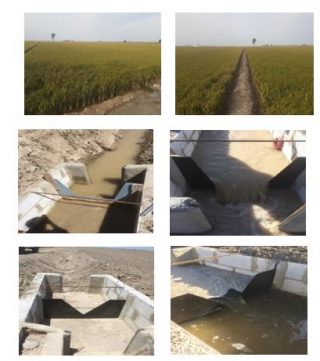 In Farm 2 (Rubiales), it is proposed to re-dimension the filtering system, wash the drip lines, install a flowmeter, and, with the upgraded installation, manage the drip irrigation system using an appropriate irrigation schedule. In 2019, there were additional problems due to the earlier use of that plot for wheat cropping. To avoid that, in 2020 we have properly prepared the plot for rice cropping, using the harrower and the cultivator to give soil and subsoil the compaction and consistency needed to avoid water percolation, which was the main cause for last season’s high amount of water used. The plot has also been laser-levelled.

This season, apart from the Netafim drip irrigation system, we will also install a moisture sensor at 40 cm depth, provided by AGQ laboratory, and a flowmeter. 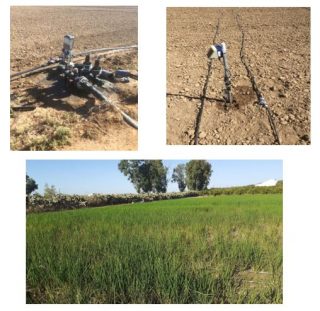